Advocates say CBD, a cannabis extract, can be used as medical marijuana for ill or anxious dogs

High summer is hell for my goldendoodle, Monty. At the park, grass seeds and burrs catch in his woolly mop of black fur. The pollen and dust set off his skin allergies.

The heat – more severe every year in the Pacific north-west – cuts fetch time in half. Worst of all, in our hometown of Portland, July is the month of fireworks. Monty is usually affable and calm. But in the weeks around the 4th, and even sometimes into early August, he’s regularly sent skittering down the stairs to the garage by the pop of a rocket or the sizzle of a fountain of sparks. Sometimes he’ll stay down there in the dark for hours, resisting treats – even bacon.

At my local bar, where Monty is allowed on the patio, one of the staff told me months ago that she fed her Pomeranian treats made from CBD, an extract from cannabis plants. She used them around the 4th “to calm him down” and beat the heat.

No stranger to the products of Oregon’s burgeoning pot industry myself, I wondered if her prescription might work with a rather larger dog.

Internet searches seemed promising. Advocates, entrepreneurs and even scientists have advocated CBD as a treatment for a wide range of canine and feline maladies from allergies to anxiety. There are widely-repeated industry claims that the pet market for CBD doubled between 2008 and 2014, with further projections of 3-5% annual growth in the market.

CBD is not psychoactive in humans, unlike THC, the compound that gets people and other animals high.

But like THC and other compounds in cannabis plants, CBD interacts with the human – and mammalian – endocannabinoid system. The precise effects of CBD on our bodies are a matter of extensive ongoing research, but advocates of marijuana as a medicine have long held that CBD can treat epilepsy, chronic pain, anxiety and other maladies.

A selection of recent findings suggest that it may be useful for humans in treating problems like PTSD, chronic pain and the psychological effects of long-term cannabis use.

CBD also supposedly moderates the effect of THC, so it has been deliberately cultivated in certain strains and introduced into extracts on the theory that it creates a smoother high. (Informal “testing” supports this view.)

I wanted to find out more about how CBD could help Monty. My first port of call was with another Portland resident – an English bulldog named Max Daddy, who is the face of a newly launched range of CBD remedies.

Max Daddy is no stranger to commerce, and this is not his first brush with fame. He is the live-in associate of another English bulldog, Zelda, who may be one of the best-known dogs in the country.

The current Zelda is the third in a line of dogs with the same name owned by Carol Gardner, a serial entrepreneur, author and former advertising executive. She started a company called Zelda Wisdom in 2000, which put pictures of Zelda the first in costume on greeting cards.

Zelda’s fame has made her a hometown hero – a statue of Zelda dressed as a Beefeater sits at the entrance of Portland’s upscale Heathman hotel.

When Zelda the third came along, Gardner added a male rescue bulldog, Otis. When he died, Gardner says, Zelda was devastated. So they rescued a second male, Max Daddy, who had previously been imprisoned at a puppy mill.

“He was kept in a cage for his first five years. He was kept for breeding, all they wanted from him was money.”

Max Daddy’s health issues were worse than Gardner realized. He had severe joint problems and significant pain. “His patellas are not really attached to anything,” Gardner says.

When she picked him up in Illinois, he came with a fistful of drugs, from Prozac to painkillers. Gardner thought there had to be a better way.

She started researching CBD and tried it out on Max Daddy. “It was natural, it didn’t have the side effects of drugs,” she says.

She liked the results but found the products inconsistent. She decided to hire chemists and develop her own line. Now, she says, Max Daddy is off his prescription meds and seemingly doing well. Zelda also takes it, and Gardner says it has reduced her anxiety.

When I met Max Daddy, he certainly seemed relaxed. He cheerfully submitted to yet another photo session, then jumped on the couch and drifted into a snore-filled sleep. Gardner credits it all to the CBD.

This year, Gardner and her business partners started selling the treats she has developed at fireworks stands in the Pacific north-west ahead of the 4th.

“We have been amazed by the results,” Gardner says. She plans to go national with a treatment she says is a near-panacea.

But what does the science say? At Colorado State University, the veterinary school has the wheels turning on a long-term study of the effects of CBD on pets, including any therapeutic benefits. So far, the results are encouraging.

A team led by Dr Stephanie McGrath found an 89% reduction in epileptic seizures for dogs treated with CBD. They are moving on to study CBD as a treatment for osteoarthritis in dogs, and are recruiting for a larger epilepsy study.

When I got home I tried Max Daddy’s treats on Monty. (Although Gardner says they offer a more consistent dose than other products, the treats, made with organic ingredients, are still very minimal doses for a 55lb pet.)

Although no fireworks have exploded recently, I did notice that Monty’s preternatural chill seemed to deepen after taking them. When we went to the park to play fetch, he didn’t drag me in the way he usually does. A beloved visitor was not jumped on in the way the visitor usually is. Monty stopped scratching as much.

While the jury is still out on the stronger claims of the CBD sellers, for now it appears that the treats do little harm, and there is emerging evidence that they may well do some good for certain conditions.

There is still, however, the delicate matter of the law.

Although marijuana has been legalized in the west coast states, Colorado and elsewhere, it is still illegal under federal law; as a consequence, pot products cannot be carried across state lines, and weed businesses still have problems with banking.

Many people in the burgeoning medical industry think CBD is different, based on their interpretations of the Drug Enforcement Administration’s public advisories on the matter. The DEA says otherwise. A DEA spokesman, Special Agent Wade Sparks, says: “CBD is a schedule 1 controlled substance,” meaning as far as the federal government is concerned CBD remains in the same legal category as meth or heroin.

If there is limited enforcement, it’s because of the varying prosecutorial stances of federal prosecutors, especially in states where pot is legal, and the priorities forced on the DEA by epidemics of meth and opioid use.

“I think reasonable taxpayers understand that we devote our resources to the most pressing issues in the community,” Sparks says. 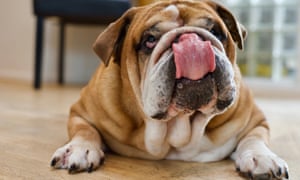 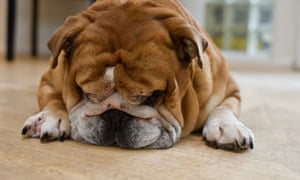 Although CBD products are widely available even in states where pot is not legal, people possessing or using it, as well as anyone shipping it across a state line, are taking a calculated legal risk.

Nevertheless, CBD has long been used in medical marijuana for humans. The legalization of recreational and medical pot up and down the western seaboard of the US, and now in Canada, means that it has become a key product of a massive international growth industry.

Urban dog owners ask a lot of the animals who live with them. Our environments are full of objects and situations that stress dogs out.

Our schedules don’t always match up with our dogs’ needs for affection, attention and exercise. And our neighborhoods are full of humans who, for reasons best known to themselves, enjoy explosions. All of these things are a source of anxiety for our animals.

If CBD is proven to be as useful as its advocates believe it is, it may be revolutionary. In the meantime, it could at least be a salve for owners who, like me, can’t stand to see their dogs in distress.