SAN FRANCISCO (KRON) — Medical marijuana was legalized in California because of the relief it brings to sick patients. One of the drug’s health benefits is to calm nausea and spur the appetites of people undergoing chemotherapy. But the drug’s growing popularity is bringing to light an unwanted side effect for a small number of heavy users. KRON4’s Maureen Kelly takes an in-depth look at this newly discovered syndrome. “It’s the most excruciating nausea that you could possibly imagine,“ Steve Ellias said. Ellias, of Grass Valley, is describing the symptoms he has endured on-and-off for more than three decades. He now believes the symptoms are the result of his past chronic pot use. 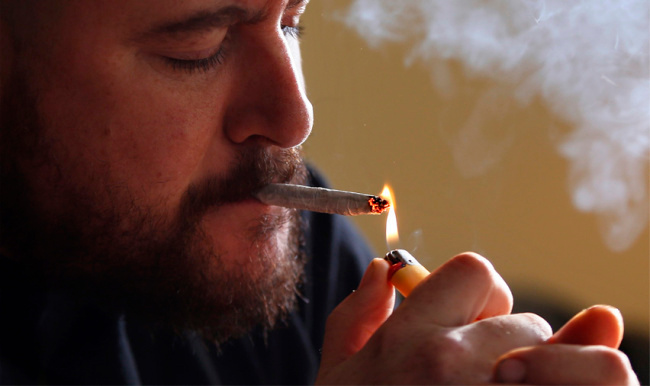 “Usually, I would smoke anywhere from 10-15 times a day,” Ellias said. “It’s like you’re at your very worst point when you have the flu and you know that you are going to be sick, but imagine getting stuck there for hours, days, and sometimes even weeks and nothing will relieve that nausea,” Elias said. “It’s almost enough to make you think you will go out of your mind.” Sometimes the bouts would be so serious he’d end up in the emergency room. “At one point, I lost 40 pounds in 10 days,” Elias said. “That’s how dramatic it was. I could not keep food or water down, not to be dramatic, but I showed up at the hospital and I was within hours of kidney failure is what the doctor told me, so this can be an actual life-threatening situation.” But for much of his life, his condition was a mystery.

Doctors sometimes suggested that his illness was all in his head. “Literally dozens of doctors looked at me, and I’ve had extensive medical tests,” Elias said. But at his last trip to the emergency room, a nurse showed him an article about a 2004 medical study of something called Cannabinoid Hyperemesis Syndrome or CHS, which linked cyclical vomiting with heavy cannabis use. “As soon as I read it, knew that it was me. I knew that it was me. And I almost teared up because after 35 years of suffering, I could not believe that I had finally found a diagnosis,” Elias said. Steve says it wasn’t so much the study’s link between pot smoking and excessive vomiting, but the identification of the one thing that commonly brings patients who suffer from CHS relief–immersion in hot water by way of a hot shower or a bath.